How cool would this be at a wedding , I just found these in an old family photobox. If you cant read the red text there is a great line of ‘ Polyfoto is the only system of photography giving natural and truly characteristic portraits, SINCE THE SITTER can move and converse freely whilst 48 photographs are being taken’ oh the boy is me. 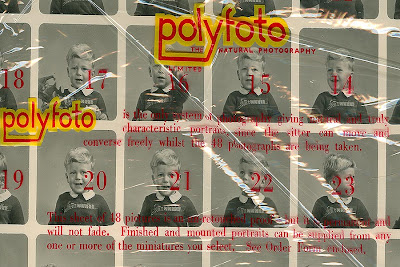 Polyfoto, a portrait service offered from the 1930s in many British department stores. For a standard fee the sitter would have 48 photographs taken in various head-and-shoulder poses in rapid succession. The impressively large camera actually used unperforated 35â€‰mm film, producing small square images, which were available within a day or two as a contact sheet from which enlargements could be ordered. The service continued throughout the Second World War, and later ventured into colour. But its operators were often poorly trained, and as photo booths became popular the system faded into oblivion.

This site uses Akismet to reduce spam. Learn how your comment data is processed.